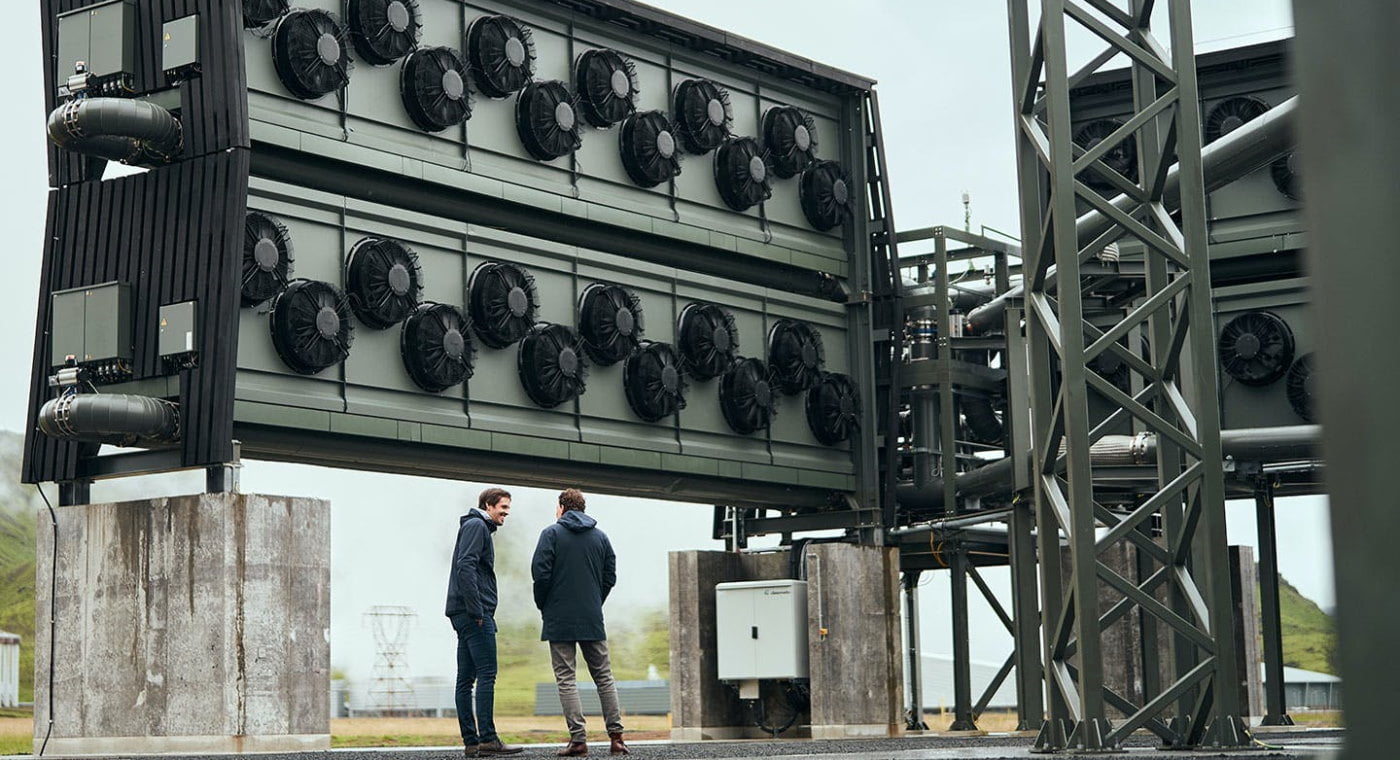 Image courtesy of Climeworks
By Eko Diena in
Science / Tech

Simply sucking all of the excess carbon out of the air seems like a simple and wonderful solution, but it's not that easy at all.

Each of its carbon-sucking units is the size of a shipping container, yet the world’s largest direct air capture machine – the Orca plant in Iceland – only captures and stores about 4,000 tonnes of CO₂ a year. That’s about three seconds’ worth of global emissions.

Still, the Intergovernmental Panel on Climate Change reports that technologies that remove CO₂ from the air like this will be needed alongside deep cuts in emissions to reduce global warming. In fact, climate scientists modelling pathways for stabilising warming at 1.5°C (the goal of the Paris agreement) assume that a carbon removal industry based around one method may need to be around 40% the size of the current fossil fuel industry.

There are several ways to remove carbon from the atmosphere. One is called bioenergy with carbon capture and storage, or Beccs. Here, vast acres of fast-growing plants are grown and then harvested and burned to generate electricity or make biofuel for vehicles. Beccs can even use waste from farms or timber plantations. The carbon normally released during the burning or fermentation stage is instead captured and pumped underground in old oil and gas wells or deep rock formations called saline aquifers. These storage sites can be beneath land (which is common in the US) or the seabed. There are over 20 years of experience in storing CO₂ under the Norwegian North Sea, for instance.

Attempts to calculate how much carbon removal is possible often address how much it will cost, or how much carbon can realistically be extracted from the atmosphere. This can be done by assessing the land area available to produce biomass crops, or the size of underground reservoirs for storing the gas.

But what scientists often overlook when predicting the future capacity of these technologies is how society will need to change to accommodate them. For instance, what will a sudden change to how land is used mean for communities and livelihoods? How can increasing demand for land to grow food or restore habitat be reconciled with the need to produce lots of biomass for Beccs? And who should even be able to make these decisions for them to be considered fair and ethical?

If world leaders at the UN climate summit in Glasgow fail to address these questions, they run the risk of making overly optimistic judgments about how much CO₂ it’s possible to remove. If it transpires that the international community cannot rely on these technologies as much as climate modelling suggests we need to, then society will need to decarbonise even faster to prevent catastrophic climate change.

There is only one demonstration Beccs project operating in the world today, in Illinois, USA. Alongside other researchers, we talked to experts working in sectors like forestry and energy to understand what’s needed to bring this new industry to life.

These experts are aware of large-scale bioenergy projects, such as those cultivating sugar cane ethanol in Brazil, which have deprived local people of land and destroyed native habitat. Many of them worry that a global Beccs industry that developed from these practices would exacerbate inequality by, for example, reducing access to food and ultimately fail to remove carbon from the atmosphere by actually increasing deforestation. The UK’s largest power plant for generating energy from biomass, Drax, mostly imports wood chips from North America, while UK farmers grow grass for use in a handful of smaller-scale power plants. But as the UK develops a Beccs industry, rising demand for bioenergy could mean the cheapest and most exploitative sources win out.

The experts were also unsure about whether there is even enough free land to accommodate expanding bioenergy crops. Many voiced concerns about the consequences for the rights of people living in and working on land that is earmarked for Beccs.

Some experts doubted there was sufficient political support – capable of transcending short-term electoral cycles – to pull off the necessary innovation to build carbon capture and storage capacity in the UK. This technology is needed not just for Beccs, but to decarbonise heavy industry, including steel manufacturing and chemicals.

We found that these social and political obstacles were rarely represented, if at all, in models of the global potential for carbon removal. Of course, some of these things can’t be modelled. Models aren’t usually designed to incorporate the nuances of decision-making at national, regional and local levels, or the importance of cultural and spiritual values that people endow landscapes.

World leaders need a more complete picture of the complexity we know exists in the real world before embarking on the construction of a global carbon removal industry. Making this happen is as much a question of who pays to remove the carbon and who has a say in how the land is managed, as details about technology. If the political and social limitations are not better understood, then it is hard to imagine how these carbon removal pipe dreams will get off the ground.

Could we use sugar-loving microbes to power future cars