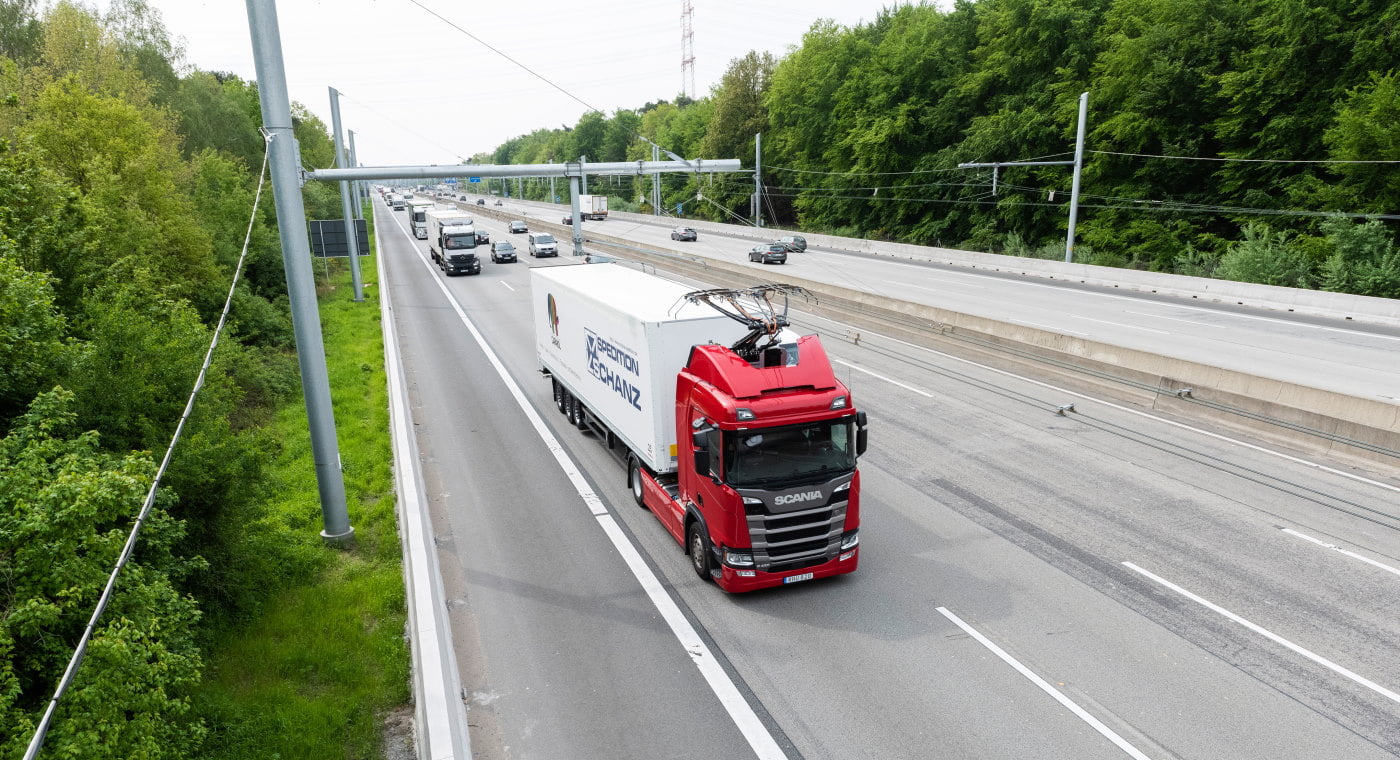 Photo from Siemens
By Eko Diena in
Transport / Travel

With governments all over the world setting goals to reduce emissions dramatically over the next decade, road freight presents a big problem. Last week the UK government announced they are joining the list of countries that are trialling e-highway technology as a potential solution.

Tom Stacey, Senior Lecturer in Operations and Supply Chain Management at Anglia Ruskin University explains the plusses and the problems of this approach and a few possible alternatives.

Road transport accounts for around a quarter of all CO₂ emissions – reducing this is crucial to reaching net zero emissions in the next 25 years. When it comes to alternative fuels in passenger vehicles like cars, the automotive industry seems united around batteries and electric motors. In the UK, the growth in electric vehicle sales matches the decline in new petrol and diesel cars.

But when it comes to the haulage industry, with its lorries and other heavy goods vehicles (often abbreviated to HGVs), the path is not so clear. Each HGV weighs 3.5 tonnes or more and travels long distances. Diesel has been the fuel of choice, offering fast refuel times and long ranges on a full tank.

Of course, diesel engines emit CO₂, and so the industry and governments are trialling new technologies to clean up the sector. The UK government recently announced £2 million in funding to research the feasibility of installing overhead power lines on a section of motorway near Scunthorpe to power lorries without fossil fuels.

Known as e-highways, and similar to what you get above trains and trams, poles are set up along the inside lane of the motorway. From these, 700 volt power lines are hung which the lorries connect to via a device known as a pantograph, which provides the power to the motor.

Questions about this system of powering HGVs abound. How will the lorries overtake or leave the lane while connected to the power lines? What might happen if the overhead cables strike the vehicle’s load? Trials are ongoing across continental Europe to try to answer these questions.

While this system is undoubtedly the most efficient way to power a vehicle – no energy is lost between the power lines and the lorry – it is potentially the most difficult to coordinate, as it will require a whole new set of infrastructure on roads and an entire fleet of compatible vehicles, as well as a way of charging haulage companies for the electricity they use. All of this equates to higher costs for an industry that works on tight margins as it is.

Siemens, the German company leading many of these trials, suggests that lorries will need to have an engine or motor and fuel source such as batteries or diesel, as well as the pantograph system to make them compatible with the e-highway. This will surely make them more expensive to buy, though a study in the UK suggested that hauliers would recoup some of this on fuel savings by using electricity. The same study estimates the cost of building power lines to cover 65% of the UK’s lorry routes will be in the region of £20 billion.

There are two other technologies with zero tailpipe emissions available to HGVs. The first is the hydrogen fuel cell, which turns pressurised hydrogen into electricity and water (so not strictly zero emission, but certainly zero carbon) to power a motor. The second replaces the hydrogen and the fuel cell with a large lithium-ion battery, which can be recharged at conventional high-power charging stations, or HGV-specific “megachargers”, such as those planned by the carmaker Tesla.

Both of these options present similar problems to e-highways. The most significant is a lack of infrastructure – there are just ten hydrogen fuelling stations in the UK, and these are better equipped for refuelling cars than lorries. UK rapid charging stations for electric vehicles exist in their thousands, but they take hours longer to fully charge an HGV compared with a car, and so are more suitable for overnight charging.

The haulage industry will want clarity from the government over which technology it should back, as its vehicles cost a lot of money and must continue to generate income, as well as keep essential goods moving in the UK. This is no doubt the reason that trials are ongoing, to try and understand which option hauliers should take.

It’s doubtful that all three technologies will end up in mainstream use, so where does the industry’s future lie? E-highways will be efficient, and the technology is already well understood from use in the rail industry, so workers have the skills to implement them. But the most liberal estimate is still 65% road coverage by the late 2030s. Lorries would still need an independent way of moving when off the e-highway.

Hydrogen will need a massive investment in infrastructure too, and is potentially not as green as electricity as 95% of the gas today is generated from fossil fuels.

Which leaves electric battery power. The rate at which people are switching to battery electric vehicles and the availability of chargers is increasing exponentially, while the cost of the technology decreases. But the much-hyped Tesla Semi truck has been pushed back another year and the company continues to concentrate on passenger cars. And the issue holding all EVs back is supply of batteries, which is struggling to keep pace with the growth of ownership.

To lower emissions and get to market quickly, electric batteries may prove to be the better option, though an ultimate mix of hydrogen and electric is likely. On a large scale, e-highways might push upfront costs too far for hauliers.