Ocean microplastics are now ending up in the atmosphere 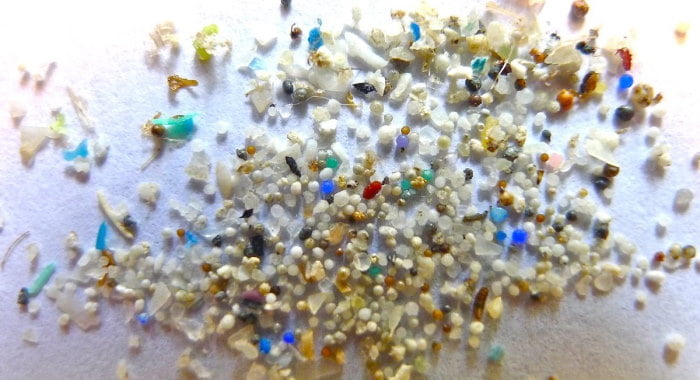 We've all heard about the huge amounts of microplastics that end up in the oceans and soil. This article by Elizabeth Claire Albers explains that isn't the end of the journey as a new survey has found that large amounts of ocean microplastics are being emitted in to the atmosphere.

Take a deep breath. The air that fills your chest and lungs is a vital mix of oxygen and nitrogen. Other things might be mingled in the air, too. For instance, small amounts of carbon monoxide, nitrogen dioxide, lead, or particulate matter such as dust and pollen commonly pollute the air. But there is something else lurking in the air we depend upon: tiny pieces of plastic.

A new study in the Proceedings of the National Academy of Sciences (PNAS) looks at how microplastics — plastic fragments smaller than 5 millimeters (about a fifth of an inch) but bigger than 1 micron — are emitted into the atmosphere, and end up spiraling around the globe in a process akin to the biogeochemical cycles of water or nitrogen. Right now, the environmental and health consequences of atmospheric plastic are largely unknown, and experts are calling for further research on the issue.

“What we wanted to do [was] try to understand how plastic is getting into the atmosphere,” lead author Janice Brahney, assistant professor of natural resources at Utah State University, told Mongabay in an interview. “This is something that we don’t know very well.”

The authors hypothesize that plastic particles are “entrained into the atmosphere through mechanical processes.” For example, sea spray is known to launch tiny plastic pieces into the air when bubbles break at the surface. Vehicles traveling along roads can also push plastic upwards. Farmers tilling their land and applying fertilizers made from biosolids, which have been shown to contain microplastics, as well as plastic mulch, are other potential sources.

By combining microplastic deposition data from 11 different sites in the western United States with an atmospheric transport model, the study found that roads emitted 84% of atmospheric microplastics, while the ocean emitted 11% and agricultural soil dust accounted for 4%. Cities didn’t seem to contribute that much, which may run counter to what a lot of people may think, according to Brahney.

“If you’ve asked most people where they thought atmospheric microplastics were coming from, they would probably say a city,” she said. “And we found that not to really be the case.” This is probably because cities have large, tall buildings that disrupt airflow, she said, which would disable the wind’s ability to lift microplastics into the air.

The study also found that annual plastic production on land wasn’t the key source of atmospheric microplastics — that would be the marine environment. This highlights the role of “legacy pollution in atmospheric plastics,” Brahney said.

“It’s the plastics we’ve produced over decades and decades and decades that ends up in the marine environment, getting turned up and broken down and then emitted into the atmosphere,” she said. “That was a really interesting finding because that again is opposite of what people might expect.”

The mass production of synthetic plastic took off after WWII, when plastic packaging and disposable kitchenware gained in popularity. Since then, it’s estimated that about 10 billion metric tons of plastic have been globally produced, and that 12-18% of this plastic has ended up in the natural world.

The study estimates that about 10 teragrams (10 million metric tons) of microplastics are emitted into the atmosphere each year, equivalent to the annual amount of anthropogenic black carbon emissions.

Study co-author Natalie Mahowald, an Earth and atmospheric scientist at Cornell University, said the paper may have raised more questions than it answered.

“We’re just pointing out that there [are] atmospheric microplastics,” Mahowald told Mongabay in an interview. “And we need to figure out what the sources are, what the impacts are, and how we can solve this problem.”

To Mahowald, one of the most important things to investigate is how this influx of microplastics is impacting atmospheric processes.

“They’re likely to … be interacting with clouds, especially ice clouds, but also could be changing the chemistry of the atmosphere,” she said. “So not only are we worried about human health [and] ecosystem impacts, but there could be impacts on the earth system, on the climate system as well.”

Steve Allen, a microplastics expert and co-author of another study on atmospheric microplastics, said the PNAS paper confirms assumptions that large amounts of microplastics are circulating in and out of the world’s oceans.

“We had assumed that was the case but the modeling shows it quite clearly,” he told Mongabay in an email.

He said that while the study’s modeling was very sophisticated and detailed, the quantities it used were actually quite conservative.

“By giving it conservative inputs it may be underestimating quantities blowing offshore and blowing onshore,” Allen said. “It is hard to quantify as yet because we have so few studies to base anything on. This study is a great first step towards it and shows how much more data we need."

“We can safely say that atmospheric microplastics are a real thing and [they are] clearly being transport[ed across] long distances,” he added. “The studies on the effects of microplastics suggests that we need to do something about it. Now.”

Both Brahney and Mahowald also say the issue needs to be urgently addressed, and that a lot more research needs to be conducted to understand the potential impacts of atmospheric microplastics.

“I think everyone on the planet should be concerned because if it [microplastic] is moving through the atmosphere, there’s no surface of the Earth that’s untouched by microplastic deposition or atmospheric microplastics,” Brahney said.

“If we don’t change our behavior, we can expect 10 times as much or more [microplastics in the atmosphere] in the next few decades because of the accumulation of the mismanaged plastics in the environment,” Mahowald said. “So to me, that’s the big thing [and] we’re right at the beginning of seeing this problem.”

This article by Elizabeth Claire Alberts is republished from Mongabay under a Creative Commons license. Read the original article.