Our belated welcome to the European Year of Rail 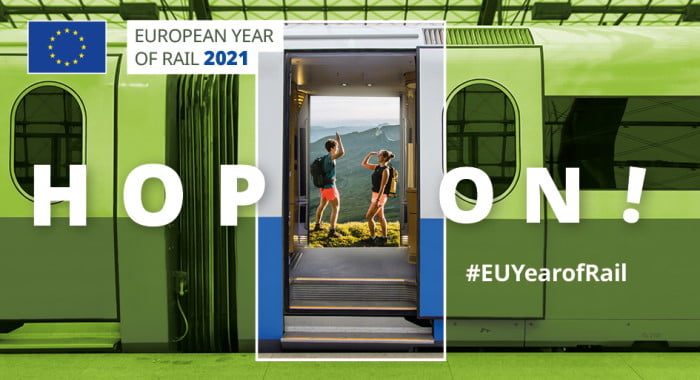 By Eko Diena in
Transport / Travel

There is a lot going on in the world and nobody can be aware of everything going on around them, but still we would like to think that we are pretty much on top of most of the bigger initiatives in Europe at least when it comes to sustainability.

How then can it be that we managed to let the European Year of Rail slip by us unnoticed?

Our poor excuse is that although the year of rail started on the first of January, the official launch was not until a couple of weeks ago on March 29th at an event in Lisbon.

The European Year of Rail is an initiative from the European Commission to highlight why rail is a ‘sustainable, smart and safe means of transport’ for both passengers and freight. The main goal here is to encourage people and businesses to use trains more to get around, which should contribute to the the EU goal, as set out in the Green Deal, of becoming climate-neutral by 2050.

Back in December Adina Vălean, European Commissioner for Transport, said “Our future mobility needs to be sustainable, safe, comfortable and affordable. Rail offers all of that and much more! The European Year of Rail gives us the opportunity to re-discover this mode of transport. Through a variety of actions, we will use this occasion to help rail realise its full potential.  I invite all of you to be part of the European Year of Rail.”

There are a number of activities going on throughout the year, as well as large grants up for grabs for countries undertaking rail improvement projects. We will to try to actually keep up to speed and to hop on board with reporting the most interesting bits over the next 9 months.

Why should the future be rail?

The EU message is about safety, sustainability, smartness (the ability to be connected, charge devices and work or watch Netflix on the train), and connectivity between the centre of cities.

They are all valid, even if the connectivity can't rival personal transportation which lets you go where you want at the moment you want to go, but the sustainability is really very solid.

Rail is largely electrified and emits far less CO2 than equivalent travel by road or air. It currently carries around 7% of passenger journeys and 11% of freight across the EU, but accounts for only 0.4 % of EU greenhouse gas emissions, while all EU transport accounts for 25% of the EU’s total emissions. Plus, it is the only transport means that between 1990-2017 has consistently reduced its emissions and energy consumption, while increasingly using renewable energy sources

Just to clarify the safety argument here's a little infographic showing the number of deaths per billion passengers/km over a four year period. Trains come out of it much better than anything else on wheels, though flight takes the top spot for safety.

While the rail network can't take you everywhere across Europe yet, there are a little over 201,000 km of track with most major cities well connected. There are also a lot of high profile projects underway to improve connectivity like Rail Baltica which will connect Finland, Estonia, Latvia, and Lithuania to the European standard gauge railway network via Poland.

So, once again, a belated welcome to the European Year of Rail, and an extra special hello if you are reading this on a train.