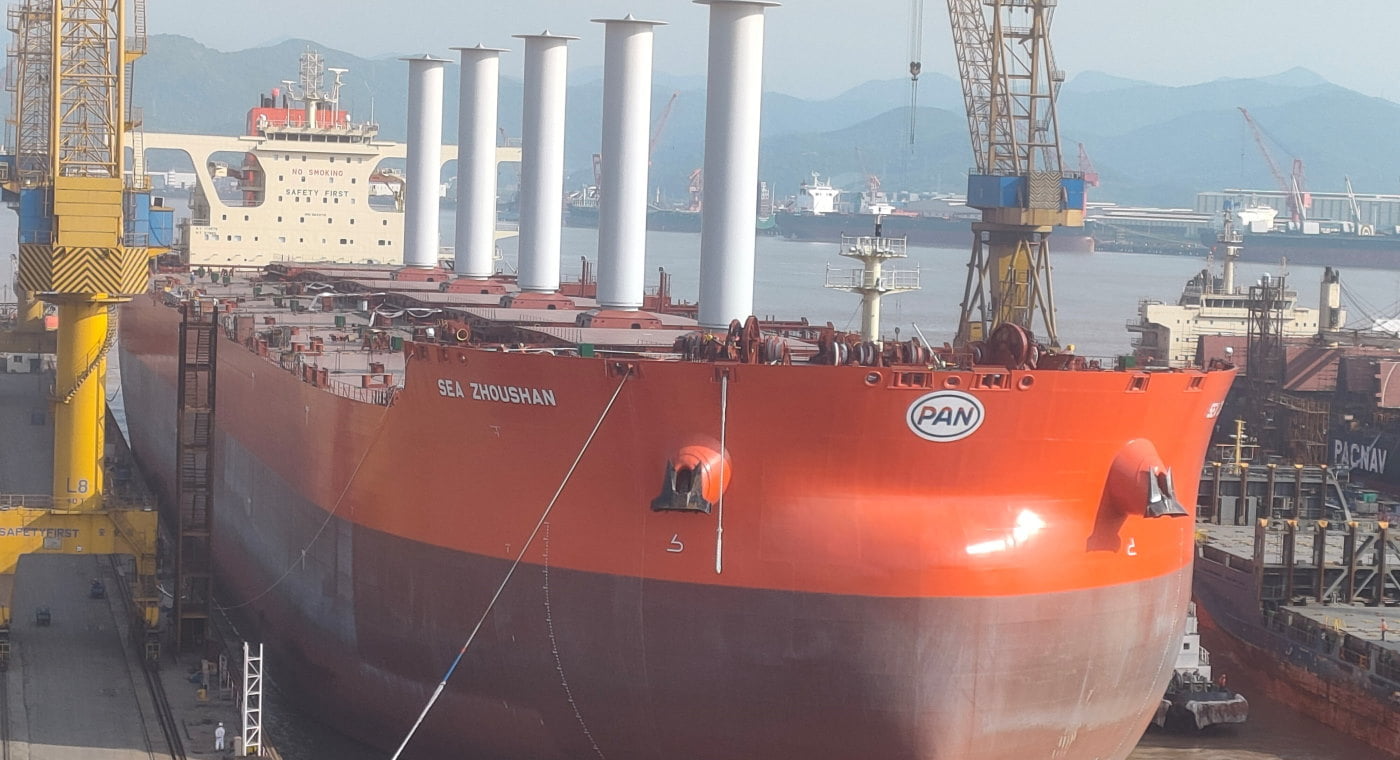 Photo courtesy of Vale
By Eko Diena in
Transport / Travel

Last week Vale, a global mining and shipping giant, announced that it’s fleet of ships will now include the first large ore carrier in the world equipped with rotor sails, and sustainability news sites went wild.

Before we even get to why this might be a big deal, let’s start out with what that sentence even means.

Vale is the world’s largest producer of iron ore, pellets, and nickel, and as well as producing it, they move it all around the planet. Among many other interests they have a fleet of VLOCs (Very Large Ore Carriers), which as the name implies, carry very large amounts of ore, around 325,000 tons of it at a time in fact.

Obviously to carry that amount of anything around the world uses a huge amount of energy, and Vale have decided to offset some of that by installing five rotary sails on the top of one of these ships.

These don’t look much like sails as most of us imagine the word, they are 24 metre tall tiltable cylinders that actually look a lot more like chimneys than something designed to catch and harness the power of the wind.

Let’s not get over excited here, this is not a case of install the sails and switch off the engines, but they do give an efficiency gain of about 8%, or about 3,400 tons of CO2 equivalent emissions per year.

That doesn’t sound like so much, but the amount of energy saved and emissions cut by this one big ship really isn’t the point here.

If the pilot proves successful then it is estimated that over the next couple of years 40% of Vale’s fleet will have the technology installed, which already makes the reduction a much more significant number. More than that though, if one huge and high profile company shows the technology works well then it will hopefully motivate other shipping companies to adopt wind power technology. Given how huge a carbon emitter the global shipping industry is that has the potential to be a huge deal.

Decarbonizing, or even reducing the carbon output of whole fleets of cargo ships would be a massive step in the fight to slow down the rapid march of global warming.

Those strange looking Rotor Sails are provided by a Finnish company called Norsepower. We are not going to go into a technical explainer here, but they are basically spinning vertical cylinders that harness something called the Magnus effect to generate power, because when air moves over a curved surface, it creates a perpendicular force that can be harvested. The sails are also designed to be tiltable to allow the ship to pass under bridges along the cargo routes it will be used on.

As Tuomas Riski, CEO of Norsepower explains: "Installing our Rotor Sails on the first VLOC demonstrates that our technology is adaptable across varied operational profiles and vessel types. As vessel operators and charterers strive to decarbonise, the value of wind propulsion for both a retrofit and newbuild vessels is undeniable.”

This is by far the biggest implementation of Norsepower’s sails to date, so while five strange looking sails on one ship, saving only 8% of the power it uses might not be huge, it has the potential to be industry changing.

We don’t want to get too excited about singing the praises of Vale, they have a pretty questionable history in some of their mining operations. But they do seem to be making a lot of sustainability moves recently, including decarbonising mines using hydroelectric power, and becoming a leader in sail powered shipping would be a huge step in the right direction.