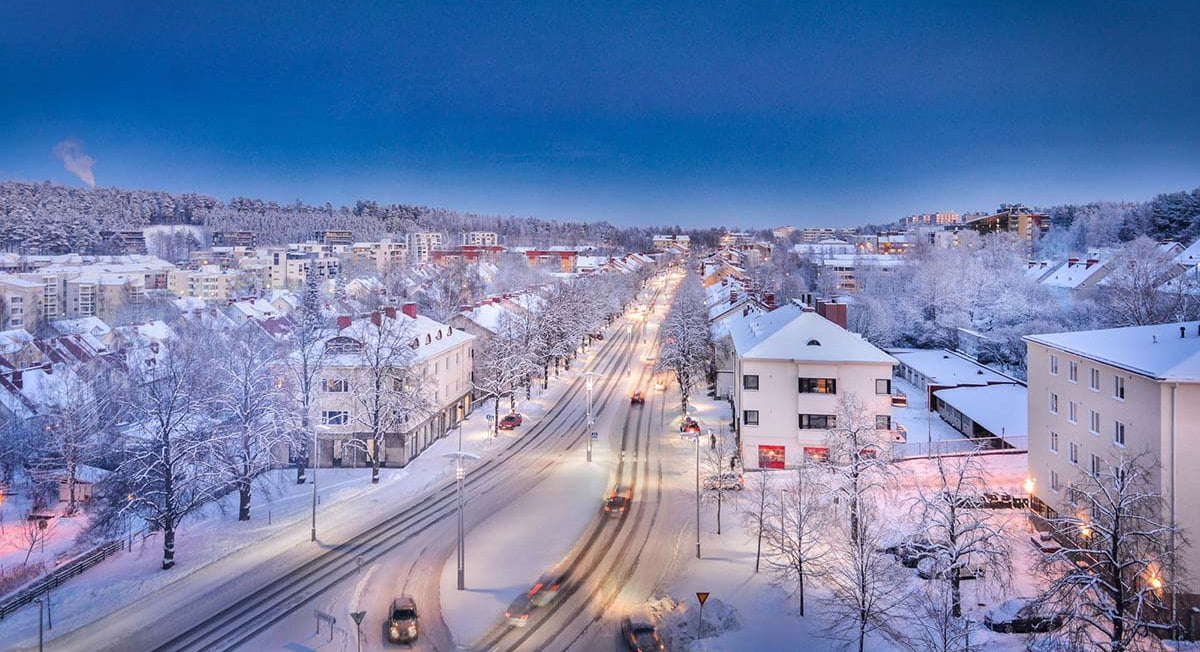 How many Finnish cities can you name?

Perhaps that isn’t so surprising in some ways, Finland is a big country, by European standards at least, but with a population of only 5.5 million people. The country is 76 percent forest and contains about 180,000 lakes.

The people who do live there seem to love it though, with Finland being voted the happiest country in the world in 2021 for the fourth consecutive year. All of that forest and lake can’t hurt, and neither does the fact that the free state education system is widely regarded as one of the best in the world, or that the nation has more saunas than cars.

Finland is not a utopian paradise, it’s a real nation on planet Earth and faces the same problems as everywhere else. It’s not without issues of racism and transphobia, and the indigenous Sami population face exclusion from government policy and prejudice in general society. Plus there is the weather, this is definitely not the tropics.

Aside from happiness there are a few other areas where Finland stand out though, and one of them is sustainability.

Scandinavia as a whole seems to be leading the world when it comes to being planet friendly, with Norway leading the way in electric car sales as a great example.

But there is one city in Finland, that most of us didn’t name in the first question above, that is really leading the way and showing the rest of the world the way forward.

It’s a city that aims to be carbon neutral within the next four years, compared to a national target of 2035 in Finland and an EU target of 2050. Oh, and they have a bigger goal beyond that as well, to have a completely zero waste circular economy by 2050.

The European Green Capital 2021 is both the smallest city to be given the award so far, and the furthest north. Situated about 100 km northeast of Helsinki, on the shore of Lake Vesijärvi, it is home to about 120,000 people.

What was once a traditional, industrial town has undergone a transformation into a modern green city that shows how urban environments really can actually meet the challenges of the climate change age.

Picture a modern environmentally friendly city and you might conjure up images of solar panels, windmills, vertical gardens, and hyperloop transport systems, but Lahti really doesn’t look much like that at all. It’s an average looking small city with wide streets and apartment buildings.

The reality is that all of the sustainability magic is going on behind the scenes, and is deeply ingrained in the town planning.

It starts with the something as simple as making all of the homes and schools energy efficient, and then creating that energy in the best ways. Electric power is provided from 100% renewable sources, and urban heating is provided by a local bioenergy plant, using recycled fuel and local, certified wood.

Traffic has been cut down dramatically, with more than 50% of local travel being done by public transport, cycling or walking.

The city has an innovative groundwater system that has been certified by UNESCO and is responsible for delivering the world’s best drinking water.

Then there is recycling, which is done on a scale that most places fail to come anywhere close to, with about 99% of the city’s household waste currently reused in some way. What was once a large landfill site is now an open green space, and next to it has been built the Kujala waste centre which deals with it all, 46% is used to create recycled materials and the rest is used to produce energy.

It wasn't always this way

This is all a far cry from the Lahti of half a century ago. What makes the current sustainability situation even more impressive is that the city has a history of industry and pollution.

After the Second World War, Lahti experienced rapid industrialisation that included population and economic growth, but also led to significant environmental challenges, such as the eutrophication of Lake Vesijärvi, which by 1975 was one of the most polluted lakes in Finland, and a higher dependency on cars in the city centre.

“Not a single person would have gone for a swim in the lake in the 70s. People didn’t want to talk about the state of the lake,” limnologist (lake specialist) Juha Keto, said in an interview with EuroNews recently. “The lake was filled with rubbish, algae and seaweed. You could have walked on the lake – that’s how bad it was. Fishermen would set their boats to sail from Lahti’s port eager to reach clearer waters and leave behind the stench of sulphur.”

The solution to the pollution problem, was the Vesijärvi 1 Project, which was begun in 1975, and cited as “the largest restoration of a food web in the world”, with university research groups, residents, local companies and the City working together to improve the lake’s condition. More than 1 million kilos of roach were removed from the Enonselkä Basin and over a million young pike-perch were introduced to the lake over the next 12 years. This resulted in a significant decrease in harmful blue algae.

The water quality has been greatly improved and the lake is now rich in aquatic plants and fish. People go there to swim all year round, from the warmest summer days to the iciest winter evenings. According to the Finnish Society of Sport Sciences, around 150,000 Finns are regular ice swimmers. Physiologically, the icy water is said to have immensely beneficial effects on mental health.

Because of this important conservation work, the city was soon recognised for its environmental expertise and in 1996 the Department of Environmental Ecology of the University of Helsinki was established in Lahti.

“We organise many events for the lake, including over 580 lake evenings where I taught people about Vesijärvi. A lot of local people wanted to participate and take action for our lake,” says Keto.

“We saved our lake together. Nothing would have changed if I was doing this alone.”

One of the most original things about Lahti is its personal carbon trading model. That might not sound sexy – but it’s pretty revolutionary when you understand it.

Essentially, residents sign up for a mobile app which gives them a CO2 limit, or carbon budget, to stick to each week. If they stay within the limit, they are rewarded, which makes it a big incentive to get the bus to work instead of driving.

It’s called CitiCAP and helps locals track their daily carbon footprint when it comes to transport.

The app recognises how the person is moving via motion tracking and automatically calculates the emissions caused by their mobility, based on time and distance travelled.

“The people of Lahti are the first in the world to get to trade their carbon emissions,” adds Huttunen.

So what are the rewards? Citizens earn benefits and services via the app in the form of bus tickets and discounts on local products. That means you don’t get penalised if you don’t stay within your carbon limit, but you do receive rewards for sticking to it.

It’s currently a pilot project but Huttunen hopes the app will expand and turn into something a lot more ambitious throughout the rest of the country.

Carbon neutrality even seeps into arts, culture and the sporting world in Lahti.

The Lahti Symphony Orchestra set itself the challenge of becoming the first carbon neutral orchestra in the world.

LUT University in Finland calculated the orchestra’s carbon footprint and since 2015, it has been consciously managing its energy, water, waste and travel.

So how does this work in practice?

Firstly, audience and staff are encouraged to consider their emissions caused by arriving to concerts, as transportation is what causes the majority of the orchestra’s emissions. A ‘green button’ has been added for customers who shop online for tickets so that concert-goers can easily carbon offset their journeys by paying more to contribute to environmentally-friendly projects.

The second part of the strategy relates to the hall where they rehearse. Sibelius Hall in Lahti closely manages its lighting, recycling, heating and water use. They issue digital brochures to visitors and even the musical scores are packaged in certified sleeves instead of plastic.

At the European Green Capital awards this September, they played an original piece of music entitled ICE – an ode to endangered coastal cities. Composed by Cecilia Damström and conducted by Dalia Stasevska, the piece was a haunting, 10-minute portrayal of the imminent collapse of ecosystems.

But it’s not just music…sports is taking a leaf out of the carbon neutral book too. Ice hockey is by far the most popular sport in Finland, which comes as no surprise when you realise average year-round temperatures are just 5.0 to 7.5 °C and 0 to −4 °C in the northeastern part of Lapland.

The Lahti Pelicans are out to become the world’s first carbon neutral hockey club and urge other teams to do the same.

The team has given up air travel and encourages fans to come to their games via public transport, bike or on foot. Just like the symphony hall, the club’s home uses all green energy and restaurants all serve food that is packaged plastic-free.

“The match to save the environment has to be won together. We want to embolden everyone to get involved with their own contribution to climate change action,” says Casimir Jürgens, defense for the Lahti Pelicans.

We haven't even touched on the 'green nannies' who teach children in the city about the environment from a young age, or any number of other great innovations taking place in Lahti.

To find out more about what they are doing during their year as European Green Capital, and their sustainability in general, take a look at the official website: greenlahti.fi.

Grenoble next year, and Tallinn in 2023 have quite a tough act to follow, but how great would it be if they can take this torch and run with it, setting even bigger and better green examples for us all.