The state of soil: Problems and solutions under our feet 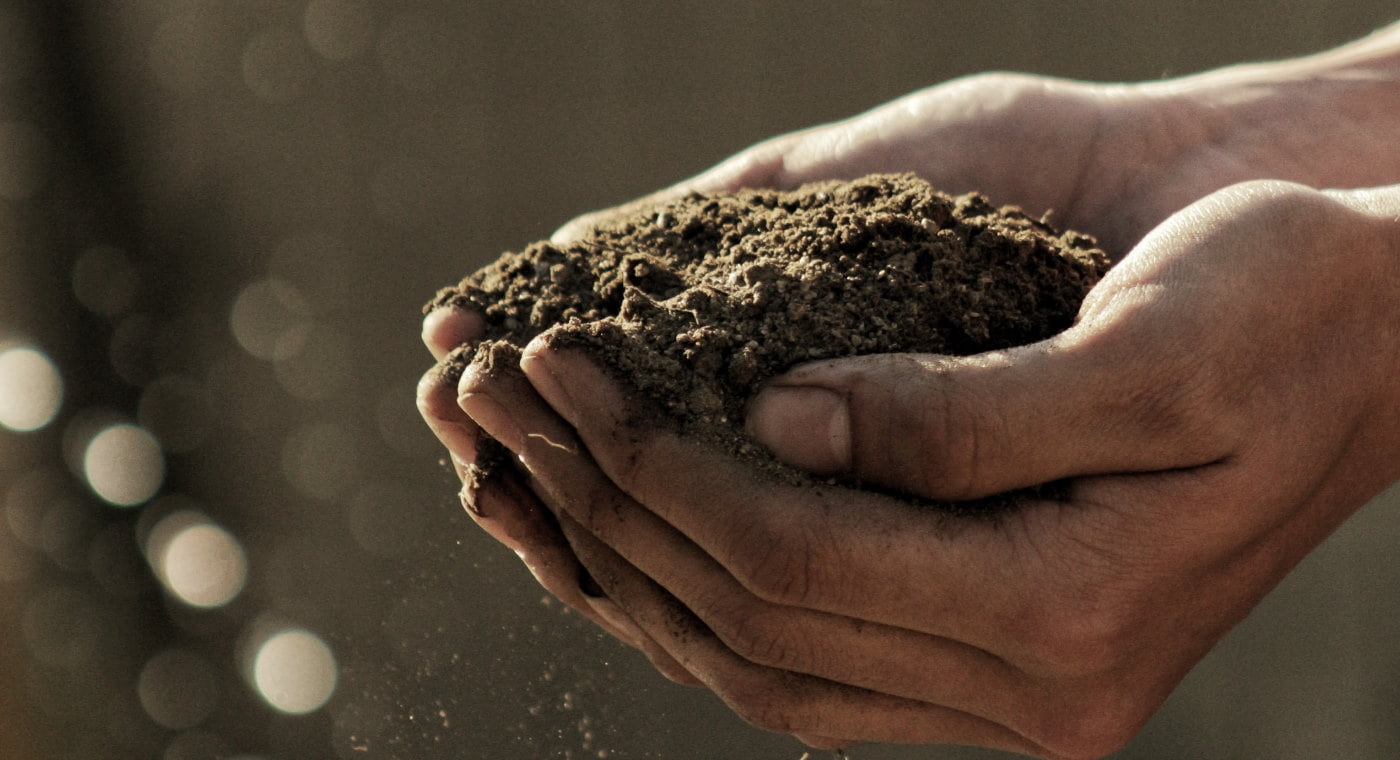 Photo by Gabriel Jimenez on Unsplash
By Eko Diena in
Nature

We worry about the oceans, the rivers, the air around us, but a lot of the time we don't pay nearly enough attention to the world beneath our feet, to the soile that we walk on, and that gives life to everytihng that grows.

Jonathan Smith interviewed Prof. Claire Chenu on the state of Europe's soil, why it matters and what we can do about it. Prof. Chenu is Research Director at France’s National Institute of Agricultural Research (INRAE) and professor of soil science at AgroParisTech. In 2015 she was nominated Special Ambassador of soils by the Food and Agriculture Organization (FAO) of the United Nation.

Soil also contains unimaginable numbers of fungi, bacteria and other microorganisms with millions of species living in a single handful. It provides vital services like water storage and purification and even helps regulate our climate. But the health of our soil is under threat from intensive agriculture, climate change, and urbanisation that seals soil beneath buildings, roads and other infrastructure.

The result is loss of organic matter and nutrients leach leading to degraded soil that is less fertile and fragile. At present approximately 33% of global soil is degraded and in the EU, erosion is affecting 25% of agricultural land.

The good news is that this bleak picture can be reversed.

‘Soils are the link between local and global issues, such as food and water security, climate change, conserving biodiversity and sustainable energy,’ states international soil expert, Professor Claire Chenu, who is coordinating a 24-country research and innovation initiative to build a cross-European framework for climate-smart sustainable agricultural soil management systems.

‘On the one hand, we are taking stock of what already exists, analysing what could be better coordinated (for example, how fertilisation guidelines account for soil properties), and co-developing tools with the relevant stakeholders,’ said Prof. Chenu. ‘‘In addition, we are developing innovative approaches and demonstrating best practices, providing key tools for fostering the uptake of climate-smart sustainable soil management as proposed by the European Union mission on soil health and food.’’

Prof. Chenu also notes the importance of increasing awareness of the tough messages from the United Nation’s Intergovernmental Panel on Climate Change (IPCC) and Intergovernmental Science-Policy Platform on Biodiversity and Ecosystem Services (IPBES) stating we are compromising our future on this planet, as well as new policies being launched, such as the European Green Deal.

‘We need to increase our knowledge for some options,’ explains Prof. Chenu. For example, how should we manage trade-offs between storage of organic carbon in soils and losses of nitrogen and phosphorus, which in the case of nitrogen may be in the form of nitrous oxide (N2O), a greenhouse gas with 300 times the warming potential of carbon dioxide (CO2)? How can the below-ground input of carbon to soils be increased – with which crops, varieties, rotations? How can compacted agricultural soils be restored? Can roots and soil biology be used for that? What is the technical and economic organic carbon storage potential of different soils, under different climates and different management options?

Prof. Chenu is deeply involved in using science to inform policy and in awareness raising activities on soils. Here, in a written interview, the world-renowned scientist talks about “climate smart” soils and why they matter to every one of us.

Soil awareness has improved over the past few years. Is this a window of opportunity for making long-term progress?

Soil awareness has improved markedly since the International Year of Soils 2015, when many awareness-raising campaigns and events were launched. There is clearly a window of opportunity now.

However, the general public is still not sufficiently aware that soils are the link between local and global issues, such as food and water security, climate change, conserving biodiversity and sustainable energy, and that we can change the way we manage soils.

Discussions around climate change seldom refer to soil, but soil degradation is recognised alongside climate change as one of the most pressing problems facing humanity. Should solutions address both issues simultaneously?

Climate change and soil degradation need to be addressed simultaneously!

Soils have a large potential for alleviating climate change by absorbing organic carbon. In this process, known as carbon sequestration, CO2 is removed from the atmosphere by vegetation and stored in the soil's pool of organic carbon, which is contained within soil organic matter. Increasing the soil organic matter of degraded soils via appropriate management techniques can bring benefits, like increasing yield and making the soils more resistant to drought and erosive rains.

Degraded soils should be a priority for strategies aimed at reducing greenhouse gas emissions and adapting to the changing climate.

How close is the EU to achieving climate-smart sustainable management of agricultural soils?

We still have a long way to go in Europe, even if the situation is less serious than several regions elsewhere in the world, as soil erosion, loss of organic matter, contamination and compaction are widespread among agricultural soils.
Soil salinity is increasing as a result of climate change. Soil sealing is rapidly worsening due to the covering of the land for housing, roads and other development.

It is extremely important to support the development of climate-smart sustainable management options for agricultural soils. A number of agricultural practices and systems allow us to tackle soil degradation and climate challenges simultaneously while preserving the productive capacity of soils.

There is no “silver bullet” but instead a whole range of relevant practices.

The sharing of knowledge and its application under real world conditions is crucial for successful soil management. How can the European Joint Programme (EJP) SOIL achieve this?

Developing new knowledge is needed, but that’s not enough. Knowledge must also be shared among farmers, extension services and food chain stakeholders, landowners, policymakers and scientists. In addition, knowledge developed by stakeholders also needs to be shared with scientists, which we will achieve by strengthening our networks.

In each EJP SOIL partner country, we have established a national hub, which gathers representatives of the different soil stakeholder communities. We consulted them prior to the preparation of our roadmap to identify their aspirations regarding agricultural soils, their management and analysis of the availability and use of knowledge, as well as the barriers for implementing climate-smart sustainable soil management.

To improve Europe’s soil research capacity, we are targeting young scientists and will be organising secondments within the EJP SOIL consortium and our research infrastructures, such as long-term field experiments and laboratories. We use a variety of tools, like webinars, videos and our annual science days for communicating on EJP SOIL and for disseminating information.

We have also established a network of national communication representatives to ensure the optimal flow of information between national soil stakeholders and scientists and the EJP SOIL programme and are developing a knowledge-sharing platform.

How is the project tackling the main challenge of getting beneficial soil management practices widely taken up?

This is the most ambitious and difficult part of our programme and of many research programmes.

We think that what is needed is a better understanding of climate-smart sustainable soil management and how soils function by farmers and different stakeholders of the food chain. This is where communication, dissemination and the exploitation strategy come in.

In addition, soil stakeholders and farmers, in particular, require better technical support to change their approach to soil management. Here, tools are needed, as previously mentioned, like guidelines, decision support tools, and information on soils. Such tools would need to be co-developed. EJP SOIL analysed the existing national soil monitoring systems – these provide information on the status of soils – and made proposals to improve them and harmonise them better, between themselves and with the Land Use/Coverage Area frame Survey (LUCAS) European soil monitoring systems. We will also examine the use of emergent tools like proximal sensing, which uses for example sensors mounted on vehicles to analyse soil quality.

Finally, policy is essential for encouraging action, both at the national level as well as the EU level. Farmers need incentives to take risks; hence, we must underpin policy with a strong scientific basis.

This article was originally published in Horizon, the EU Research and Innovation magazine