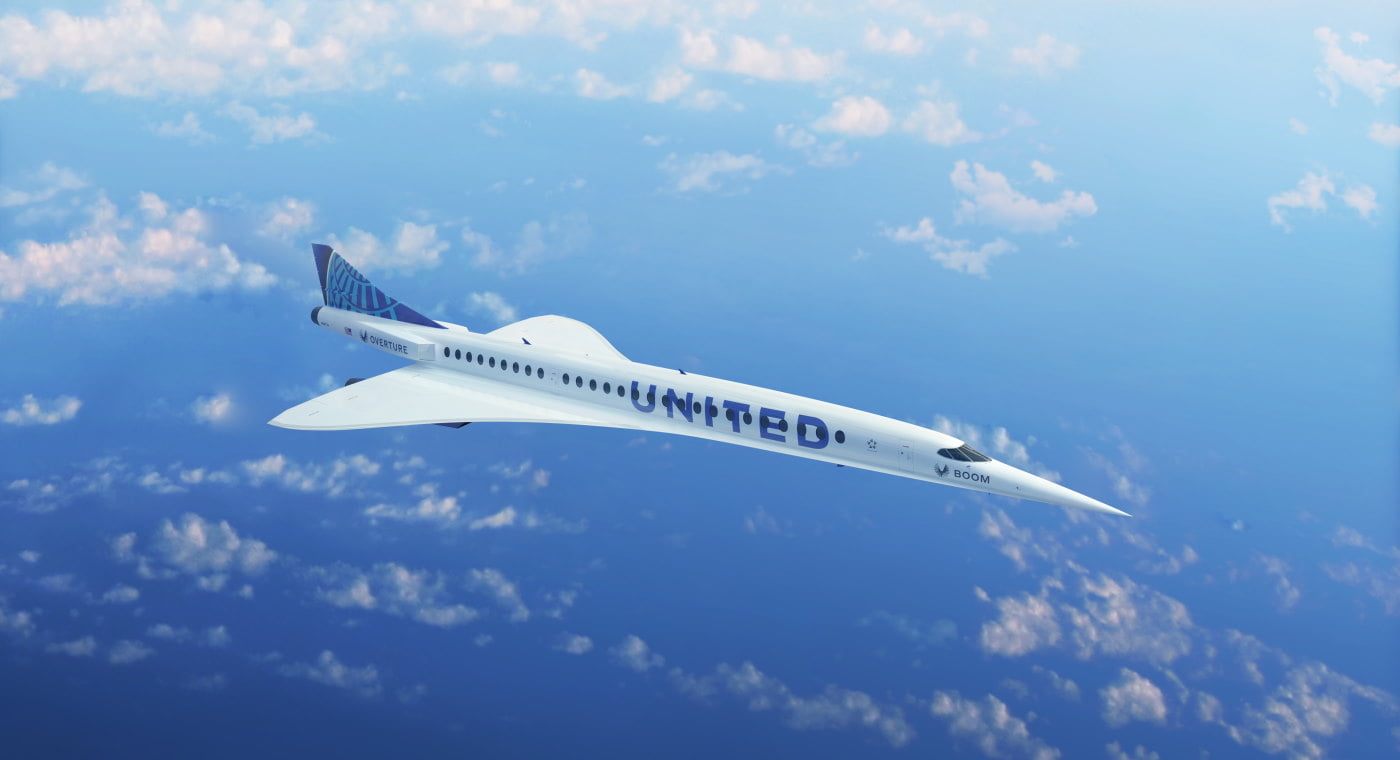 Image courtesy of Boom
By Eko Diena in
Transport / Travel

One of the very first articles that we posted on Eko Diena about 15 months ago looked at the possibilities of a return to supersonic passenger flight sometime in the near future.

It's now almost 19 years since the last flight of Concorde, and one of the many reasons cited for the retirement of the fleet was the fuel consumption of the planes. They needed to burn a LOT of expensive and carbon heavy fuel to achieve the amazing speeds that they zipped across the sky at, and one of the biggest barriers to recreating those kinds of supersonic speeds in a new more climate-conscious era has been mitigating that.

Just maybe though someone is going to achieve it. Not only by reducing the amount of fuel that the planes need to operate but also changing what that fuel is.

A company called Boom have been working on a supersonic plane design called Overture, which seems to be far enough along in development that United, one of the world's largest airlines, has announced plans to buy 15 new Overture aircraft from the company, with an option to buy 35 more, and "return supersonic speeds to aviation" in the year 2029.

So far they have not conducted a supersonic flight test, completed an Overture aircraft, or in fact even started to build the factory that will produce them, but they do have investment and now orders.

The challenges of going supersonic

Of course there are challenges when it comes to flying faster than sound, the big two are noise and pollution.

Travelling faster than the speed of sound causes a sonic boom, which can be heard on the ground below and behind the plane as a loud explosion. It's a big deal which is why the new kid on the supersonic bock went as far as to name the company Boom.

This boom has previously limited where planes can fly at supersonic speeds, Concorde flew at subsonic speeds over land and only accelerated to faster than sound once it was over the ocean and away from people and building below. That wasn't the only noise issue that Concorde had though, the powerful engines that propelled it were also much louder on take off, landing, and during 'normal' flight than other passenger planes.

Boom believes it has overcome at least some of those issues, and claims that its plane will not be any louder than other modern passenger jets while taking off, flying over land and landing. It also hopes improvements in aircraft design since Concorde will help it reduce and mitigate the sonic boom.

The other big issue, and the one that is most important to cost and environment conscious airlines and passengers is the fuel consumption.

In a recent interview with the BBC Kathy Savitt, Boom's chief commercial officer said "In order to fly supersonic, you will need more power, you will need more fuel," but perhaps surprisingly she also explained that she expects Overture to be operated as a "net-zero carbon aircraft".

Speaking at a recent event Scott Kirby, the Chief Executive of United also had a lot to say about the fule issue: “The Concorde was designed 60 or so years ago, so I don’t know if it’s leap or a crawl forward, but [Overture is] a huge improvement. The fuel burn is a fraction of what the Concorde was.”

Is the fuel sustainability issue solvable?

The big difference doesn't come from just the volume of fuel being used though, as part of the purchase agreement United has insisted that the Overture's engines are designed to run on 100% sustainable aviation fuel (SAF).

Dr Guy Gratton, associate professor of aviation and the environment at Cranfiled University explained to the BBC that SAF could take the form of "posh biodiesel" and be made out of everything from waste animal fat from the farming industry to specially grown high-energy crops

While we do have the technology to create such fuel, the big problem is that "the world is very far from having anything like the production capacity needed" to produce enough biofuel to power the entire aviation industry, Dr Gratton says.

Boom don't seem to see this as a problem, predicting that a "power-to-liquid" processes - where renewable energy such as wind power is used to produce liquid fuel - will make up the shortfall. According to them the technology will be ready and commercialised before their planes are ready to take to the skies.

It's true that there are billions of dollars worth of commitments from airlines and investments in the sustainable fuel sector, but it is an industry that is in its infancy and needs to be dramatically scaled up to make flying sustainable.

"Can you suddenly find an enormous additional supply of sustainable electricity at affordable prices?" wonders Dr Gratton, "I'm not saying it can't be done. It may well be done but it has not been done yet."