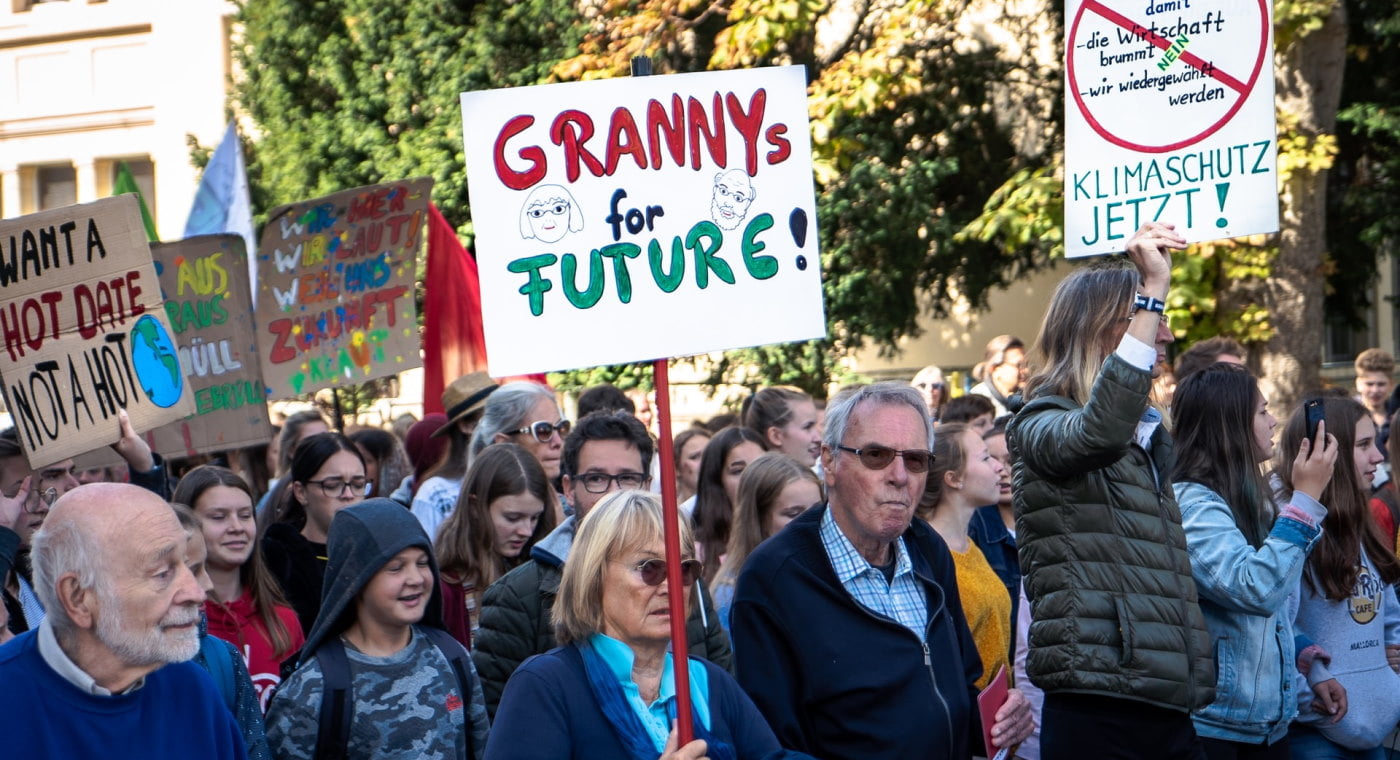 The global youth are increasingly aware of, and increasingly active fighting, the threat of climate change. This article by Aled Jones, Director, and Bradley Hiller, Visiting Fellow, at the Global Sustianability Institute, Anglia Ruskin University, explains why that isn't enough, and why it is so important that we involve more elderly generations too.

Some say age is only a number. Others associate age with wisdom. Or perhaps it is a state of mind. Whatever it is, age is a factor in climate progress, and 2021’s renewed climate momentum must mobilise the often overlooked elderly demographic.

While these milestones represent important progress, 2020 tied for the hottest year on record, and the “emissions gap” to avoid catastrophic climate change continues to widen. An accelerated whole-of-society response is required.

Elderly people are relatively invisible in climate discussions compared to the youth demographic, yet are arguably the most critical for broader climate action. Here are five reasons to broaden the youthful momentum to engage and empower the elderly:

The elderly are disproportionately vulnerable to climate change, particularly adverse health effects and exposure to extreme weather events. Their vulnerabilities may be exacerbated by impaired mobility, social isolation (in some cultures) and poor access to services. For example, 75% of deaths caused by Hurricane Katrina in the US in 2005 were aged 60 and over.

Contrarily, per capita carbon footprints of the elderly can include relatively high residential energy consumption and car dependency. Over time people in younger generations with big carbon footprints may bring their higher per-capita emissions into later life.

Globally, 65s and over are the fastest growing age demographic, poised to become one of this century’s most significant social transformations. This is not limited to developed regions like Japan or southern Europe; two-thirds of the world’s elderly today live in emerging countries and most countries are experiencing growth in the number and proportion of older persons in their population. These trends could see the elderly’s cumulative and proportional emissions contributions increase in coming years.

3. They make their vote count

Like non-violent protest, voting in national elections is often considered a right of citizenship. However, while all elderly citizens are eligible (or required) to vote, many young people cannot (or do not). Furthermore, there is a long-term trend of voters getting older in countries such as the US, where a majority (52%) of all registered voters in 2020 were aged 50 and over (up from 41% in 1996). Some studies suggest that the elderly feel they will be less affected by climate change compared to younger people, and less able to act on it, which may influence support for policy changes.

There isn’t much policy coherence on ageing and climate change. For example, the UN Sustainable Development Goals (and targets) only mention older people three times, and the main mechanism for tracking progress at national levels shows that only one country (Andorra) out of 110 reports on ageing-related efforts to achieve the goal on climate action (SDG13).

5. Older people can be wealthy

The elderly collectively control an increasing share of global wealth, spending and assets. For example, the 55-and-over population in the US already spends twice as much as the much-targeted millennial market. By 2030, it is estimated that just 11% of investable assets in the US will be held by people younger than 45. Yet despite holding most shareholder voting rights, older investors tend to consider environmental, social and governance (ESG) factors less strongly than younger investors.

Given the elderly’s position to help translate climate rhetoric into action, how do we channel their wisdom and influence? Renewed climate momentum could include raising the profile of issues and policies relevant to the elderly, like climate-related risks and opportunities in pensions and investment, household energy conservation, low-carbon mobility options or extreme weather warning systems.

It would also involve specific education and capacity-building: while today’s youth may be exposed to climate change education in school, the elderly were not, and little climate change communication to date has been targeted at older audiences. However, notable exceptions do exist such as the University of the Third Age, which aims at educating and engaging mainly retirees.

COVID has highlighted our global interconnectedness, with neither the young nor the old immune to its direct or indirect impacts. In this sense, climate change is similarly indiscriminate. In response, we have witnessed climate advocates such as Sir David Attenborough and Greta Thunberg help to bridge the generational divide. Such intergenerational solidarity offers the promise of a more inclusive climate agenda, in which a concern for the future is invoked alongside a sense of legacy and an impulse to care for those who come after.

As we confront the climate crisis together, we need all the greatness we can muster, from young and old, and all in between. Now is the time for inclusive action.